One of the things Unspun teachs clients and students in his classes on crisis management is that not everything is a crisis.

In the beginning, you have an incident, which is something that is a departure from best practice.

If you pay attention to the incident and solve it in a timely manner it usually goes away. But if you don’t then there is a good chance that it turns into an emergency situation.

An emergency is something that rquires timely involvement from senior management. It has become a serious matter and unless you resulve it in good time it would likelu turn into a crisis-like situation.

A crisis is an emergency out of control. It is out of control because the media would have gotten involved and focussed public scrutiny on your company’s every action and word uttered. At this stage everyone is watching how you handle the event. They are quick to judge and judge you they will based on how your respond to the situation at hand.

One thing worth noting, I usually tell clients, is that a crisis is a man-made situation and like anything man-made it has lots of early warning signals. It is when these signals are ignored, not acted on or dismissed without basis that the situation turns ugly for the corporation and they have a business crisis in their hands.

By this reckoning Indosat’s IM2, the so-called HSDPA service, is on the cusp between an emergency and crisis-like situation. Why?

In spite of all the warnings that IM2 has had about how bad their service has become (see Unspun‘s postings here, here, here here and here, plus do a Google search yourself, or a Twitter search and you’ll see what I mean) they’ve ignored all early warning signals. So far they have been lucky. Apart from a small article or two about customer dissatisfaction they’ve escaped media scrutiny.

But their streak of good luck may just be running out. Why? 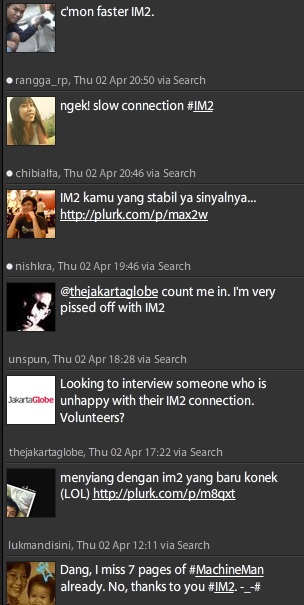 If you are on Twitter you would know that The Jakarta Globe is about to write either an investigative piece or at least an in depth piece about customer dissatisfaction over IM@s service. This would spill the issue out ofthe net and blogosphere onto the tradition media. If IM@’s streak of bad luck holds, then other papers will pick up on the story and before you know it IM2 directors would have to answer to their shareholders and other stakeholders on why they have allowed this issue to simmer and make its way from an incident to and emergency and finally to a crisis-like situation. (You have to ask yourself whether a supposedly established and large corporation like Indosat/ IM2 monitors what goes on in the net and blogosphere at all. If they did they would have known how many unhappy customers are out there, the extent of their unhappiness and the fact that a newspaper has been soliciting views from Twitters on who’s unhappy about IM2 – this includes Unspun who will sing like a bird about his sufferings as a narrowband user of IM2)

Personally, Unspun hopes that some high-powered and highly-paid person in Indosat/IM2 will be held accountable for all those senseless minutes that we users have had to endure because of how slow the service has become lately, and for thrashing IM@’s brand.

When Unspun’s contract with them runs out in May, guess who they’ll be losing as a customer forever?

3 thoughts on “IM2 Rant #2: Now watch them get into trouble”