You could say Vice President Jusuf Kalla’s goose was cooked when he first foolishly accepted Golkar officials’ suggestion a few months ago that he should nominate himself as a presidential candidate.

Once he swallowed this poison pill, some say administered by Surya Paloh, he was doomed, unless Golkar did so well at the polls that the showing would carry him to the presidential post by itself. 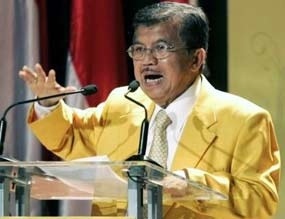 Well, it now looks like Golkar will get only about 14 percent of the votes in the elections, down from its 20+ percent the last time. There is no way that JK can be come president.

But having declared himself presidential candidate he now cannot accept a step down, which is to be the running mate of SBY in the upcoming presidential elections.

So his faction in Golkar has today rammed home the silly proposition that he would be the party’s presidential candidate. He will lose and will drag Golkar further down with him.

The wonder of it all is why the rank and file at Golkar hasn’t rebelled and called for his head. It is patent that JK and his cronies have run Golkar to the ground and they have lost support for the party. In another other place he would have been unceremoniously sacked but in Indonesia he gets to ride on the party ticket to the president’s office. Is there a better example of a group of people acting against their own self interest? Luar biasa.

One reply to “Kamikaze Politics”