When Unspun was growing up in Malaysia he was told that the kris was an intrinsic part of the Malay identity.The kris was such a big deal that some years ago when the son of a former Malaysian prime minister and UMNO big shot wanted to establish Malay supremacy over the other Malaysian races he waved it around more vigorously than a koteka would be rattled in a tribal dance. 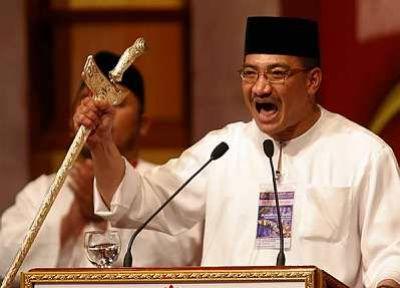 According to UNESCO the kris isn’t even Malaysian, let alone Malay. And not only that. Even the batik and the wayang is Indonesian. So what’ Malaysia got left to wave with? Malaysia, Truly Indonesia.

UNESCO on Friday awarded Indonesia four certificates, three stating that it recognized three intangible cultural heritages and one stating its recognition of the country’s efforts to preserve its culture.

After the awards were given, Agung said, the country should preserve the heritage to prevent the recognition from being withdrawn.

“Batik can be preserved by always wearing it. What will be hard is preserving wayang and kris,” he said.

Agung added he had issued a letter requesting that offices and hotels display the three objects.

Tresna Dermawan Kunaefi, Indonesia’s Ambassador to UNESCO, said the recognition as intangible cultural heritage was not based on the objects’ physical aspects, but the stories and ideas behind them.

via Batik, kris and wayang get UNESCO world heritage status | The Jakarta Post.

17 replies to “Establishing Ketuanan Melayu with an Indonesian heritage?”