This always happens. An Indonesian working maid abroad gets abused and the religious wallahs prescribe every solution but the one that matters. 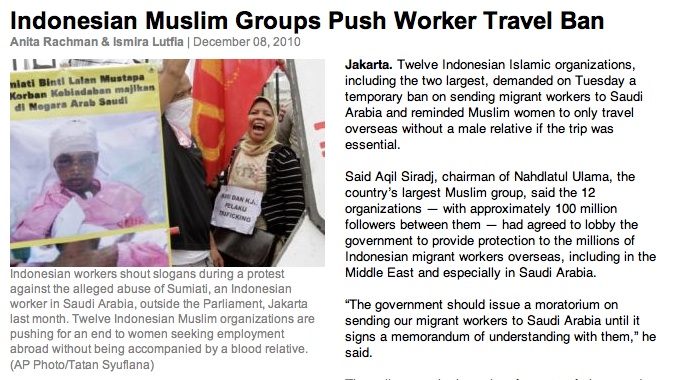 In this instance, Indonesian maid Sumiati’s abuse has the religious wallahs shrilly demanding that a temporary ban on sending migrant labor to Saudi Arabia unless they agree to sign a MoU with the Indonesian Government.

We all know that MoUs aren’t worth the paper they are printed on. In fact they have less use than soft tissue paper that you use to clean up after a particularly nasty dump. No MoU is going to lessen the threats and abuse that maids overseas will receive.

Neither with neadnderthal protestations that Muslim women shouldn’t travel overseas without a male relative.

The hundreds of thousands of Indonesian women who have to work overseas do so not so much by choice but because there is nothing better in their homeland. Many of them have families and children here that they would not willing part from if not for necessity. They also perform an important economic function in helping to lubricate Indonesia’s economy and provide the sole income or at least supplementary income to many poor Indonesian families.

So rather than making silly prescriptions the religious wallahs would do better to get their act together and organize support functions for the TKI to reduce abuse and, if the abuses occur, to provide the TKI with a means to fight back.

Why don’t these organizations organize themselves to form support services in the main markets such as Saudi Arabia and malaysia where Indonesian TKI go to? These support services can take the form of providing information to TKI on arrival (Unspun’s seen the Filipinas do this in Singapore – if they can do it why can’t we?) on what sort of rights they have, a hotline to call for counseling and to seek help in the event of abuse. They could also go further in providing shelters for the abused and a legal team to take up the complaints of the TKI in courts of law.

Wouldn’t this achieve much more and cause less suffering than demanding banks to sending migrant laborers abroad?