Guillin, China, has been a tourist hub for thousands of years. Over the Christmas break Unspun and family thought they’d try to go to somewhere cold but when we got there it was freezing at a daily average temperature of ) to 3 degrees C.

The cold notwithstanding Guilin is a fun tourist destination. Things are clean. Downtown Guilin is modern with a busy pedestrian mall that sell lots of stuff, especially outdoor clothing and gear. The food is also tasty and cheap begining with 3 Yuan (about Rp5,000) for Guilin’s national dish of noodles, some meat and vegetables. The Guilin Mifun is a very simple dish and the noodles look more like spaghetti and surprisingly very delish, especially when you come in from the cold.

There’s also lots of things to do in and around Guilin and the tourist town of  Yangshuo, four hours away by slow river cruise.

Our tour guide told us that Guilin and Yangshuo receive 15 million tourists per year. In spite of that, perhaps it was in the low season, things were not over the top commercial, you got hassled by vendors but not too much and the infrastructure makes you wish Bali would learn from them and get its act together.

In and around Guilin are several attractions. We went to Reed Flute Cave, about 20 minutes drive from the town center. It’ a huge cave complex with all sorts of limestone formation that the overworked Chinese imagination throughout the ages have identified as shapes resembling everything from lions to stage curtains and Kuan Yin. Some of the lighting was quite well done and in the main chamber we came across this:

The highlight of the trip was a four and a half hour cruise from Guilin to Yangshuo along the river Li. There we were supposed to find one of China’s most picturesque scenery of haunting and limestone outcrops shrouded in mists, the stuff of  Chinese poems, usually inspired by bouts of drinking the local brew. The scenery is so beautiful that there is a part about 2 hours into the journey where the scenery is immortalized in the 20 Yuan note.

The scenery doesn’t disappoint and here are a few photos to share with you: 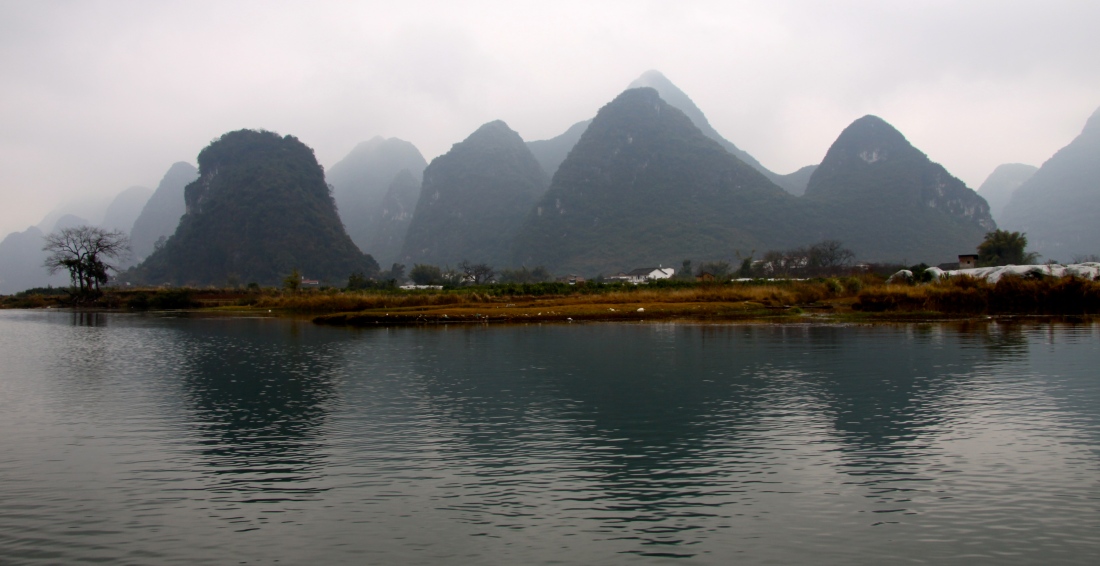 At Yangshuo, you walk some distance to the town center, which is actually the old town restored. There are two things at least that you should do in Yangshuo. The first is taste the local dish, Beer Fish. It was good but nothing to write home about. The other is to go to see the Zhang Yimou (of Crouching Tiger, Hidden Dragon fame) stage production of The Impressions of Sister Jie. I’m not sure if stage is an appropriate word but what do you call a spectacle whose “stage” is the river, shoe backdrop are the limestone outcrops hundreds of meters away, and a cast of hundreds of villagers including their boats, cormorants and oxen?

It was apparently the most spectacular production in China but has now been bumped to the third place after the Olympics and, if I’m not mistaken, the Asian Games opening ceremonies. Still it was something and we were lucky because it was the second last day before it closes down for winter. 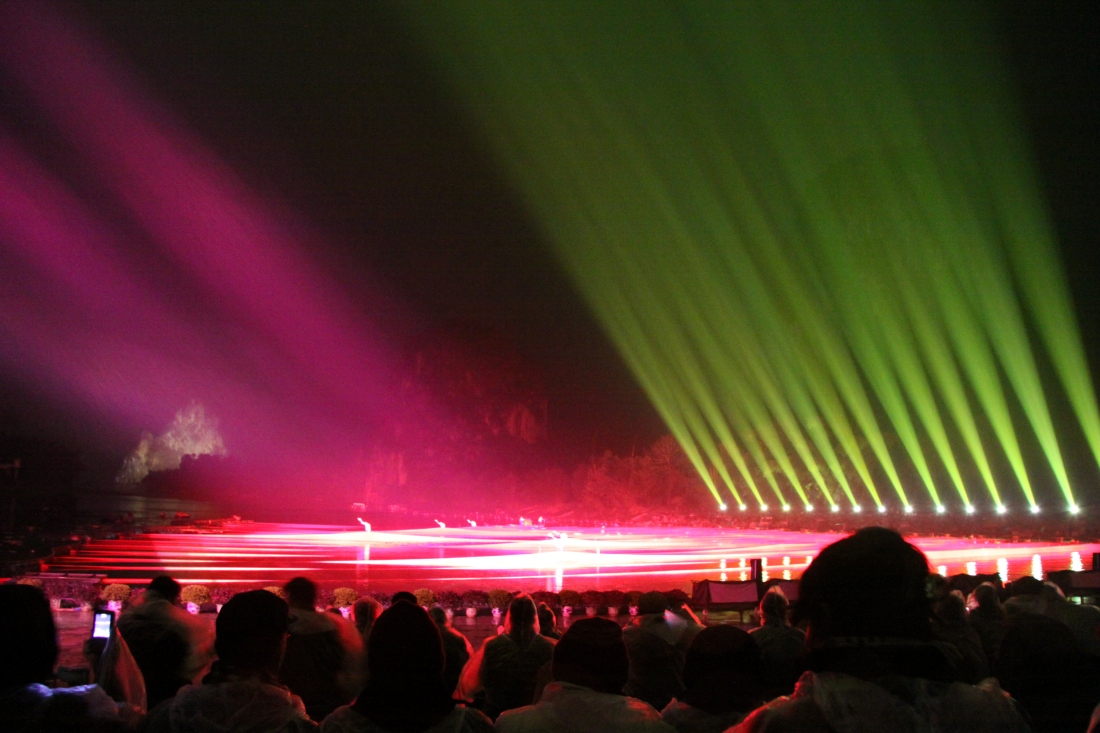 It was drizzling during the show, which was in the open air, so they supplied the thousands of spectators with rain ponchos. It was bitterly cold and the plot escapes my plebeian mind but the  show was a true spectacle of lights, a cast of hundreds, beautiful costumes and imaginative choreography.

Here are other impressions of Guilin: