There was once a time when Malaysians would make a virtue of how tolerant they were of each other’s religion and culture. The Open House, where you would invite your neighbors and friends from other races and religions to your house on the festive days you celebrate. The Government would also make a virtue of it, with Ministers holding Open House.

It didn’t matter whether the festive days were religious. The point was to celebrate together with fellow Malaysians your festive days and to celebrate with them their festive days. All sounds very 1Malaysia but while the APCO-inspired key messages of integration and tolerance are being pumped out by the Najib administration by the terrabyte-ful, the Government is also shooting itself in the foot.

Below is apparently the latest directive from the Malaysian Department of Islamic Development titled Guidelines for Muslims Celebrating Religious Festivals of Non-Muslims. 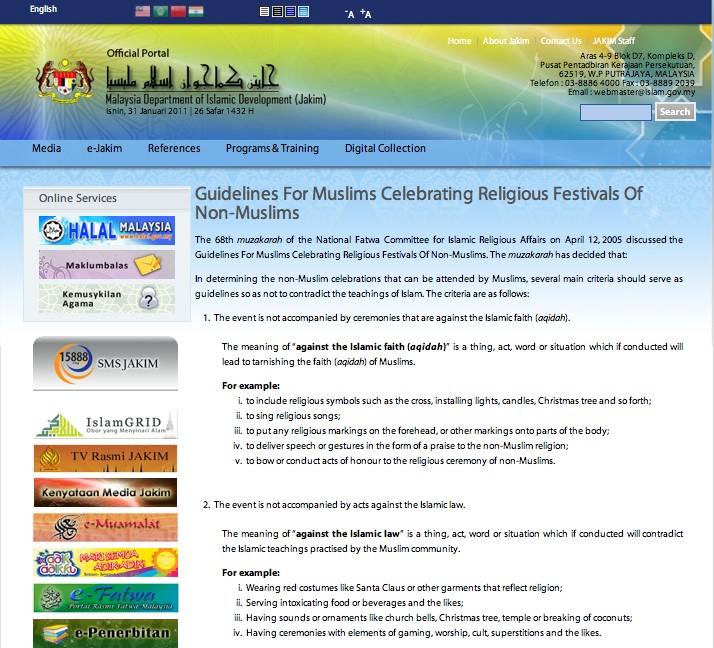 Unspun thought it was a joke until he checked out the content’s veracity at the Department’s official website. Imagine the line of reasoning is that if you are a Muslim and attend someone’s Christmas party and their house has a cross, blinking lights, candles or a Christmas tree you would have tarnished the Islamic faith? Or you go to a Hindu friend’s house for Deepavali and he has some ask smeared on his forehead as is the customary thing, and that tarnishes Islam? How can the mind work in such fallacious ways?

The only thing that gets tarnished if anyone follows these guidelines or take them seriously is their own intelligence.

4 thoughts on “Tarnishing the intelligence of Muslims”