In Indonesia Kompas is the most respected newspaper in the land. It has the highest circulation (observers put it at about 500,000 but its difficult to tell as no paper is subjected to the Audit Bureau of Circulation here). It is very conservative and very careful about what it writes, so much so that sometimes its readers have to wade through lots of ho-ing and humming just to get at the meat of a story.

So it is with great surprise then that Kompas printed a story on August 4 that alleged, among other things that democracy did not exist in Malaysia; that Najib’s wife, Rosmah, had bought a US$24 million ring and that Najib’s family was somehow related to the “Russian Mafia” and when it was called to the carpet was unable to defend it.

Yesterday Kompas, in an article entitled PM Najib Razak: Demokrasi juga terjadi di Malaysia (PM Najib Razak: Democracy also exists in Malaysia) apologized to Najib for the August 4 article. It was, however, a strange apology though.

The article quoted Najib at length refuting the August 4 article in nine paragraphs and a short 10th paragraph quoting its chief editor Rikard Bangun offering an apology to Najib and his family.

The rest was quoting Najib elaborating on the BN’s chances during upcoming elections (good) in a largely Q&A format that seems more a compensation for wrongs done to the man and his family rather than real reporting. 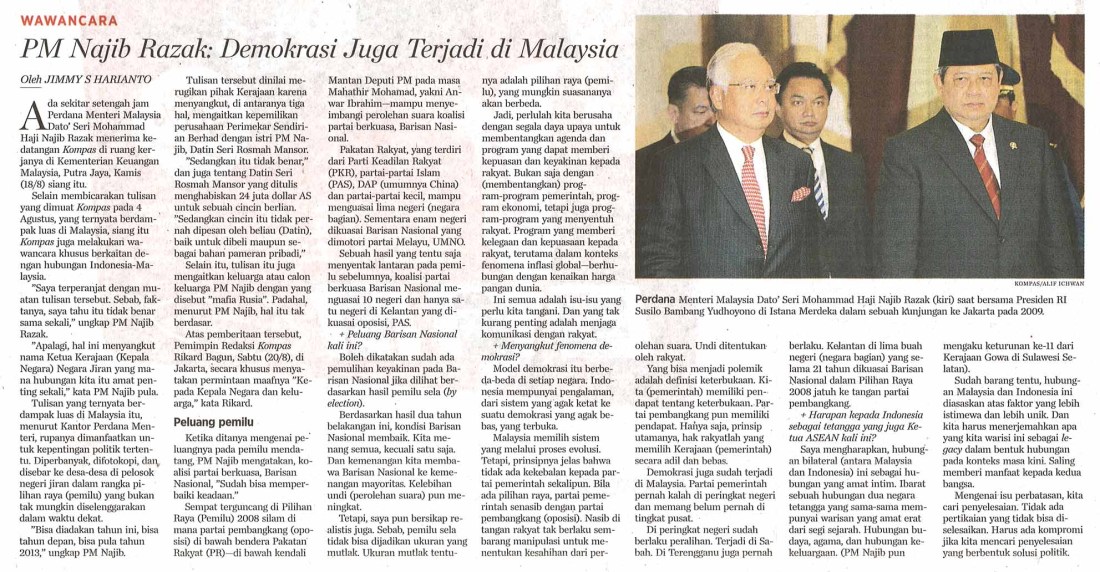 It is no reflection on Najib, of course, but shouldn’t Kompas, as the nation’s most respected publication, explain to its readers how it could either have got things so wrong about Najib and his family, or couldn’t substantiate what it had written and thus had to apologize. At either case Kompas should not have carried the story but it did.

So now we all are left wondering how it came about that the most respected publication in the country could have fumbled so badly, apologized so strangely and what sort of checks and balances it exercises to ensure that people are not the victims of misreporting?