Unspun’s past life was as a journalist in a newspaper too incredible to be true, The Asia Times. It was a menagerie of strange characters from an editor who spoke like he was high all the time as speakers taller than him blasted Wagnerian music out of his office, to his deputy who had been an advisor of Lyndon LaRouche,  to ex CIA, Mossad and KGB spooks pretending to be journalists and other assorted drunks, poseurs and yes, a few legit and good journalists.

One of the the journalists, and a damn good one, was this plucky woman by the name of Elizabeth Pisani. We met in Bangkok just as the paper was starting back in 1997 and became fast friends for life. I guess it was the feeling of solidarity as we seemed to be the only legit, and productive journalists there. Then, she had been a journalist for Reuters in Jakarta for several years and at Asia Times she covered Vietnam while Unspun covered Indonesia, inheriting some of Elizabeth’s friends and contacts whom she generously introduced. 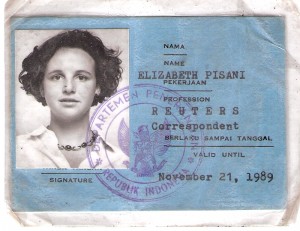 When the Asia Times went South after the Asian Economic Crisis, Unspun, then already in Jakarta sought refuge in The Dark Side (Public Relations to the uninitiated) and lost track of Elizabeth.

Until she surfaced in Jakarta, this time in her other life as an epidemologist working in the field of AIDS and HIV infection. Her stint here resulted in a wonderful and controversial book, The Wisdom of Whores. Elizabeth then disappeared into the lecture and training circuit and each time I heard from her she was in some exotic location. The last I heard from her, I think was when she was kneed deep in floods in some South American country doing god-knows-what.

Now she’s popped up in Jakarta again and after a brief catch-up at Anomali in Senopati she’s vanished again, this time to Bali and on to the more remote places of Indonesia. The reason: Taking Some Tea with the Dead. That’s the title of her new book on Indonesia which will be a culmination of all the traveling that she’ll be doing for the next few months. But while she travels, Elizabeth will also be keeping a blog, Portrait Indonesia, of her journeys and the adventures she encounters in Indonesia.

She writes wonderfully and eloquently, and has a wry eye out for the unusual so it should be lots of fun. So check out her blog and you might ant to let her know in English or Indonesian (her Indonesian – and Bahasa Gaul at that – is way better than Unspun’s) some of the more unusual and interesting people or places she could visit in her travels. I believe she’s heading for Sumba as her first port of call after Bali.

Here’s what she has to say about Portrait Indonesia

In late 2011, epidemiologist, writer and adventurer Elizabeth Pisani granted herself a sabbatical from the day job and set off to rediscover Indonesia, a country she has wandered, loved and been baffled by for decades. On this site she will share photos and occasional musings from her journey, which, if all goes well, will cover some 10,000 kilometers.

The journey will form the backbone of a book (and a multimedia BookPlus), which will include also reflections on her earlier incarnations in Indonesia. The first of these was as a foreign correspondent for Reuters in the late 1980s and early 1990s. Ten years later she was back in the very different guise of epidemiologist, helping the Ministry of Health better understand Indonesia’s HIV epidemic. That work contributed to her first book, The Wisdom of Whores, published in 2008.

The new book, with the provisional title “Taking Tea with the Dead”, will deal less with sex and drugs, and more with the other enchanting and sometimes maddening foibles of Indonesia, the world’s fourth most populous nation. We hope it will give you a taste of this beautiful, chaotic and unfathomable land.