Insightful article from Raju who was stationed in Jakarta in the late 1990s about the ever controversial Prabowo.

Unspun doesn’t care about politics and would vote for Prabowo if he could only prevent his Gerindra guys from parking in front of other people’s houses in a narrow lane in Senopati where they have two operational bases.

Once reviled, Indonesia’s Prabowo may become next president 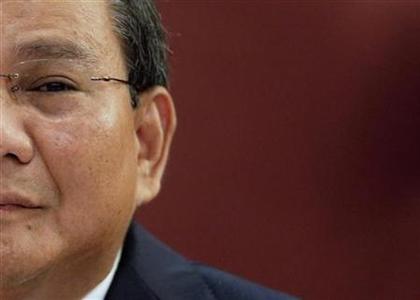 (Reuters) – Just over 14 years ago, Prabowo Subianto was one of Indonesia’s most reviled men, accused of kidnapping, human rights abuses and a coup attempt.

Now, the former general has emerged as the most popular candidate for president. If elected, he says he will not roll back the democratic reforms that Indonesia embraced after his then father-in-law Suharto was ousted from over three decades of autocratic rule.

“I think the people want strong, decisive leadership,” Prabowo told Reuters in an interview in Singapore.

Suharto was thrown out of office in May, 1998 as the country sank into an abyss of rioting and economic upheaval. Prabowo, a general from one of Indonesia’s most prominent families, was accused of instigating the violence.

Incoming president B.J. Habibie said the second night after he was sworn in, Prabowo showed up at the presidential palace, armed and with a squad of special forces soldiers, and tried to stage a coup.

Dismissed from the army soon after, shunned by the Jakarta elite and in self-exile in Jordan for some years, Prabowo has in just over a decade managed a striking transformation.

While Indonesia has rebounded from the near-chaos of the late 1990s to be one of the world’s fastest-growing economies, Prabowo is now a successful businessman and the popular head of a political party.

Opinion polls show him as the leading candidate for the 2014 presidential election, although he himself says a lot can happen before then.

Analysts say his often blunt views on the need for strong leadership and pro-poor and pro-farmer policies have gone down well with the people, for whom the events of 1998 do not matter that much anymore.

“I was a soldier,” Prabowo said, describing that period.

“As a soldier, one does not think too much about politics or political correctness or human communications. Maybe my communication was not good enough.”

A 60-year-old with the square build of the special forces commander he once was, Prabowo said he is still refused a U.S. visa because of the allegations he was involved in violence at that time. He is now divorced from Suharto’s daughter, with whom he has a 28-year-old son.

Asked about the coup charges leveled by Habibie, who took over as Indonesia’s president after Suharto, Prabowo said: “That is part of political jockeying, disinformation. I was just a straight soldier.

“I proved by my actions. Did I take over? Did I carry out a coup d’etat? History speaks for itself.”

Asked if could have taken power if he wished, he said: “Yes of course. Why not?”

Prabowo, in Singapore to deliver a lecture on the future of Indonesia, separately told reporters: “Despite controlling nearly one half of Indonesia’s combat units, I stepped down after being asked to step down by the political power.

“Because I am a constitutionalist. As an officer and a soldier, I swore an oath to serve the Republic of Indonesia. I kept my honor, I kept my oath.”

With the no-nonsense style of a former general, Prabowo’s possible ascent to power is being looked on nervously from several quarters. Investors worry he will bring in protectionist policies and political analysts say his past shows he can easily slip into strong-arm autocratic rule.

“If he won, concerns would arise about the durability of democratization,” says Kevin O’Rourke, a Jakarta-based analyst. “He also advocates an economic agenda that calls for banning rice imports and banning gas exports. He is antagonistic towards investment and market forces.”

Prabowo, the son of one of Indonesia’s most respected economic planners, has said he is not against foreign investment.

“We want foreign investment, but it must be win-win,” he said. “It must be rational, it must be cognizant of local and environmental needs and it must be on a fair and level playing field.”

In his speech, he said the country needed to avoid depletion of its energy and other resources, control population growth, improve governance and bring in structural changes in the economy to benefit the poor and the farmers, who form the majority of Indonesia’s 240 million people.

The country was once Asia’s only member of the Organisation of Petroleum Exporting Countries (OPEC) but left the group and is now a net importer, although it has vast natural gas reserves and has some of the world’s largest coal deposits.

Prabowo’s focus was, however, on agriculture, and he advocated using bio-fuels to back up fossil fuel reserves.

“Sixty percent of our population live on agriculture and are allocated three percent of the national budget in 2012,” he said.

“This is not viable. This is not wise, this a formula for misery, for unrest. This will degrade social harmony. This is what we have to have the courage to address.”

Prabowo is also feared by some of Indonesia’s ethnic Chinese minority, who control much of the country’s $1 trillion economy and were targeted in the 1998 mayhem that was orchestrated by thugs believed to be organized by special forces soldiers.

“I am very committed to a united Indonesia regardless of race, religion and background,” he said in response to a question on his policy towards the ethnic Chinese.

“My political party has a lot of members from many, many backgrounds and races. We have a lot of Chinese members but of course most of them are middle class and poor Chinese. We don’t think about race in our party.”

But Prabowo said government should re-focus spending away from the cities and the elite.

He said he did not wish to criticize President Susilo Bambang Yudhoyono, with whom he graduated from Indonesia’s military academy, but added that economic managers had blindly adopted Western economic policies in his tenure. Yudhoyono has served two terms as president and cannot run again.

Prabowo, who contested the vice-presidency in 2009 but was defeated by Yudhoyono and his running mate, said he was not a socialist but added that government could not take a hands-off stand.

“In Indonesia, we cannot have a laissez faire approach to our problems. I am of the conviction that a government must intervene to protect the very poor and the very weak, to stimulate growth.

Ultimately, Prabowo said, what was needed was a strong government.

“There are always leaders and people who will look for reasons not to try anything new. But the Indonesian leadership must have the will, the toughness, the character, the courage, to think and try to look for creative solutions.

“I was brought up with the motto ‘who dares, wins’ and I think it is time for the Indonesian elite to dare.”