Unspun mudik-ed to his kampung in Malaysia for the Chinese New Year and was tickled pink by the desperate efforts of the Malaysian Prime Minister Najib Abdul Razak’s attempt to shore up his support among the Chinese community for the upcoming national elections that must be held  in the first half of this year.

The context to this desperation is that Najib, who heads the Barisan Nasional, a coalition of race-based parties, that has ruled Malaysia in one form or another since Independence in 1958, has been losing popularity.

In the early days when Malaysians were easier to be duped the party, particularly under Mahathir on, played the nationalist card and fears of mayhem if the coalition lost their two-thirds majority in Parliament.

They then spiced up the electioneering by playing on the fears of the populace by spreading rumours that an opposition victory would destabilise the country and cause racial riots, ad hominem attacks and lots of money and a smooth-running electoral machine.

This all worked when the economic pie was working for Malaysia. But somewhere in the early 2000s the growth of Malaysia began to slow down. The pie shrunk and the inner circles within Umno (the Malay-based dominant partner in the coalition) began to scramble for the limited resources. Corruption escalated.

The fortunes of the Barisan Nasional began to slide even further after Mahathir stepped down and was replaced by Abdullah Badawi, who did not have the vision and the ruthlessness of Mahathir to drive the country forward and keep the Umno elite from their rapacious scramble for mollah.

Badawi, predictably, did not last and was quickly replaced by Najib, son of second the late Malaysian Prime Minister Tun Razak. Like many scions of the elite Najib grew up with a silver spoon in his mouth, went to the best schools in the UK and had no clue about the rough and tumble of realpolitik.

The feeling that Malaysians have about Najib is that he’s smart enough to figure out that corruption is eroding the support of Umno and the Barisan Nasional, and ruining the country. But he’s so hemmed in by the Umno elite whose main preoccupation these days is to rake in as much as they can while the ship sinks that he’s helpless to do anything.

Their rapacity has resulted in even the Malays withdrawing their support for the Barisan Nasional ruining the age-old formula of victory that the BN had relied on through gerrymeandering and social engineering.

Which leads us to the extent of desperation that Najib is showing in courting not only the Malays but also the Chinese, the second largest ethnic group in Malaysia, a task usually outsourced to their junior BN partner the Malaysian Chinese Association (MCA). The probem with the MCA, however, is that it can’t deliver any votes because it has lost all credibility with the Chinese. The president of the MCA, for instance, is Choi Soo Lek a 60 plus Chinese whose most notable claim to fame was to star in a leaked video of him and a prostitute in a cheesy hotel.

So Najib now has to court the Chinese themselves. Unspun doesn’t know who’s advising him but it would make a Public Relations professional cringe at the bad advice that he’s getting and the horrible execution of events.

For a joke Unspun’s friends gave him this “any pow” (literally Red Packets containing money  that Chinese give to their juniors during Chinese New Year). Najib’s answer? 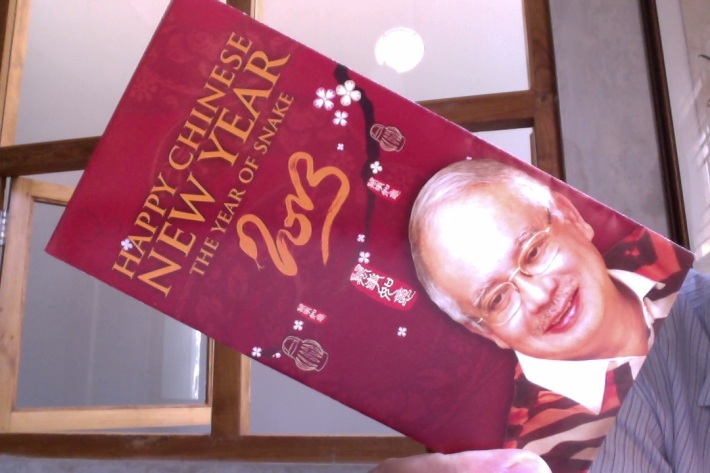 An “Ang Pow” with his face on the cover (the moustache and weak mouth is a turnoff to most Malaysian). But the juxtapositioning of his face and the year of the snake (they couldn’t get their English right even then) seems to suggest that Najib is a snake. Doesn’t his PR people pay attention to things like that?

Serperntine travails aside Najib also tried a different beat in his new year TVC to the Chinese. So you have here a so called Malay leader whose record has been one of championing the rights of Malays (against the Chinese who would swamp them with their economic prowess if their rights are not protected) doing something very Chinese-y, some would say cheesy. Notice the bad editing where the weak mouth and moustache gets a cameo role.

As if that was not enough, the BN sought to cash in on the popularity of PSY and his Ganggnam Style that has take the world and Malaysians by storm. But Najib forgot that while you can bring the horse to water you can’t make it drink (no pun intended). It resulted in this embarrassing what they hoped to be the rallying of the troops.

Najib should change image consultants. Better still, he should just resign and enjoy retirement and no amount of image making can help him increase his and BN’s electoral chances in the short span of time they have left before the next elections.

2 thoughts on “Najib and the PSYchology of BN persuasion”