The Nike Bajak Jakarta run yesterday has propelled itself into a storm of controversy because of the massive traffic jams it caused in the city. The reason why it caused gridlock in the traffic was because Nike decided to hold the run in a busy part of town at 4pm on a Saturday – when traffic is at the best of times heavy.

What ensued are furious commuters forced unnecessarily to sit in their cars or on their bikes as runners, egged on by Nike Indonesia’s tagline #BajakJKT and slogan of “You Vs JKT”, smugly showed their mastery on the roads with their branded and expensive shoes, heart rate monitors, water bottle holders and other accessories. 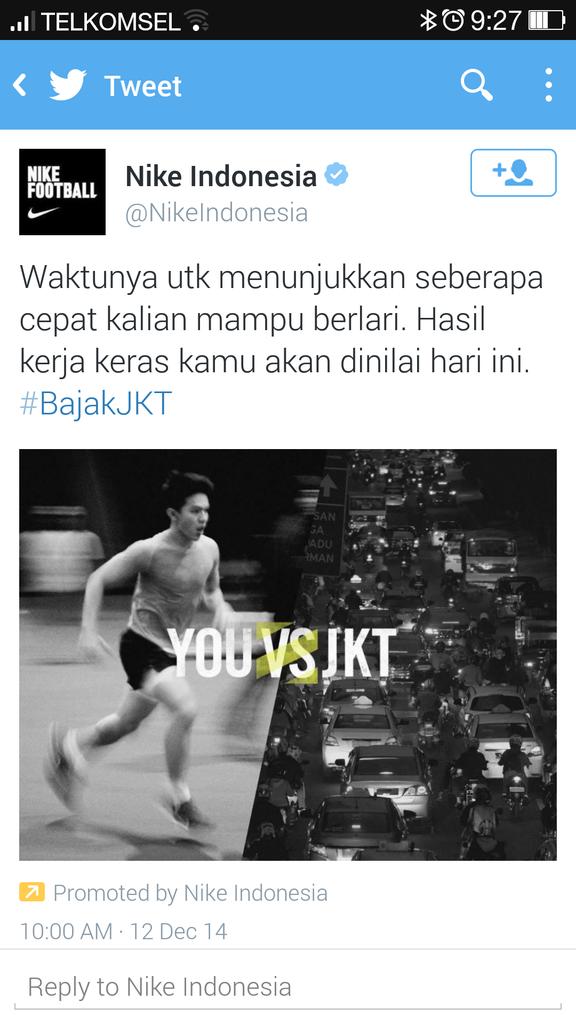 This smugness caused even more resentment on the part of the fuming commuters  against the runners and the brand. How would you feel when, after fuming for hours on the road, you checked your twitter feed and you see lots of complaints on one hand and self-congratulating, self-congratulating runners on the other?

This is not entirely fair to the runners but Unspun thinks that there is a lesson to be learned here by runners, bikers and other performing athletic feats on public roads: Jakarta roads are already crowded with too much traffic, so if you get a chance to use these roads you need to be aware that you are sharing these roads and you need to be considerate to the motorists.

Too often Unspun has seen runners and cyclists (and Harley Davidson owners too, although they somehow don’t fit into the athletic category) acting as if they owned the road during Sundays and when they are out in packs. They expect all other motorists and commuters to give way to them or be bawled out by them.

Most of the runners on the Nike run, however, were the victims of enthusiasm to the point of not exercising running prudence, perhaps because of the desperation to do something physical and outdoors in shopping mall-obsessed Jakarta.

So many of them signed up for the run even when they did not know the route and time of the Bajak Jakarta run.

If you are into running (and Unspun knows a little about this, having completed two marathons and several 10Ks and half marathons, albeit about 3 decades ago) you would want to be fussy about the route, the organisation (does it look like they will have good traffic control, crowd control, first aid, water, is it hilly or flat etc) and definitely the time.

We are living in the equatorial region. It gets very hot very quickly once the sun rises. It is for this reason that most runs are timed at 5am or so because by the time it gets to be about 9am it starts to get scorchingly hot for runners.

The other reason why runs are scheduled so early is because there is still little traffic on the roads thereby causing minimal disruption to the other road users.

Why Nike, a brand that must have deep experience in running and organizing such events chose to have it at 4pm in a busy part of town is intriguing to say the least unless it too is inflicted with her mentality when it comes to running.

Over the past two years, we have seen the rise of running as the sport of choice for hip, young and not to young Jakartans. The fact that they can now clock their performance on electronic gadgets and then show them off to the world through apps such as Nike’s +,  Endomondo, ICardio and Runkeeper has helped to fuel the popularity of running (and also cycling).

The popularity has reached such a stage that any enthusiastic but unimaginative marketeer will suggest to their bosses to hold a run if the brand wants to “connect” with the masses and the young.

So we have seen a plethora of runs happening almost every week being sponsored by all sorts of companies with the money such as insurance companies, health product manufacturers and banks (although the irony of a bank run does not seem to have fazed them).

This eagerness has resulted in some less than well organised events. In the Standard Chartered Half Marathon recently, for instance, the organisers ran out of water in the later checkpoints causing some runners to suffer from dehydration. Two were hospitalised. One of them apparently had a heart attack.

It is perhaps time for every body involved in such public runs to get together to discuss how to ensure that runs do take into account the safety and health of the runners as well as the commuters.

From the city government that issues permits, to the police who are in charge of diverting and directing traffic, to the athletic bodies, event organisers and sponsors, there should be clear guidelines on the timing, route, logistics and safety provisions for the runners.

Runners should also be more discerning about which events they join. There is no lack of choice these days so unless organisers publish the timing and the routes before hand, they should not sign up like desperados. Force them to be more responsible or they won’t get your participation.

Running is a great sport and recreation. Runs can be enjoyable – both of runners and the rest of the people they share the road with. But like that Sub 4 that most marathoners aim for, you need to work hard at it. Now hit the road!

6 thoughts on “Running out of good sense?”