Former US Ambassador who reinvented himself as the organizer of Supermentor,   Dino Patti Jallal, has a point in the ongoing feud with BEKRAF chief Triawan Munaf over Indonesian Rapper Rich Brian where children are concerned.

Children should not be exposed to obscenities. But the whole episode is not as clear cut as he makes it out to be.
The feud has its roots on 7 July when Jokowi met with Rich Brian, accompanied by Triawan Munaf, at the Istana, a huge endorsement and praise for the 19 year-old that has been making waves overseas.

Netizens loved the populist move and heaped praise on the President for being so cool.

Not everyone was happy though. On July 16, seemingly out of the blue, Dino sermonized on Twitter, saying that even though Brian may be a great performer he (Dino) as a father thinks that Brian would not make a good role model for Indonesian youth because Brians tweets often contained profanity, obscenity and disgusting elements and looked down on women.

That children should not be exposed to obscenity etc is easy to agree with but there were two problems with Dino’s argument.

The first is that its not cool to dump on Rich Brian after you tweeted back in April for help on getting him to be a speaker for your Supermentor in LA event.

Spying what she must have thought to be hypocrisy, Rich Brian’s sister Sonya Erika tweeted an eloquent screen cap of the invite. This prompted Triawan Munaf to virtually stab himself with a retweet that said only ”jlebs! 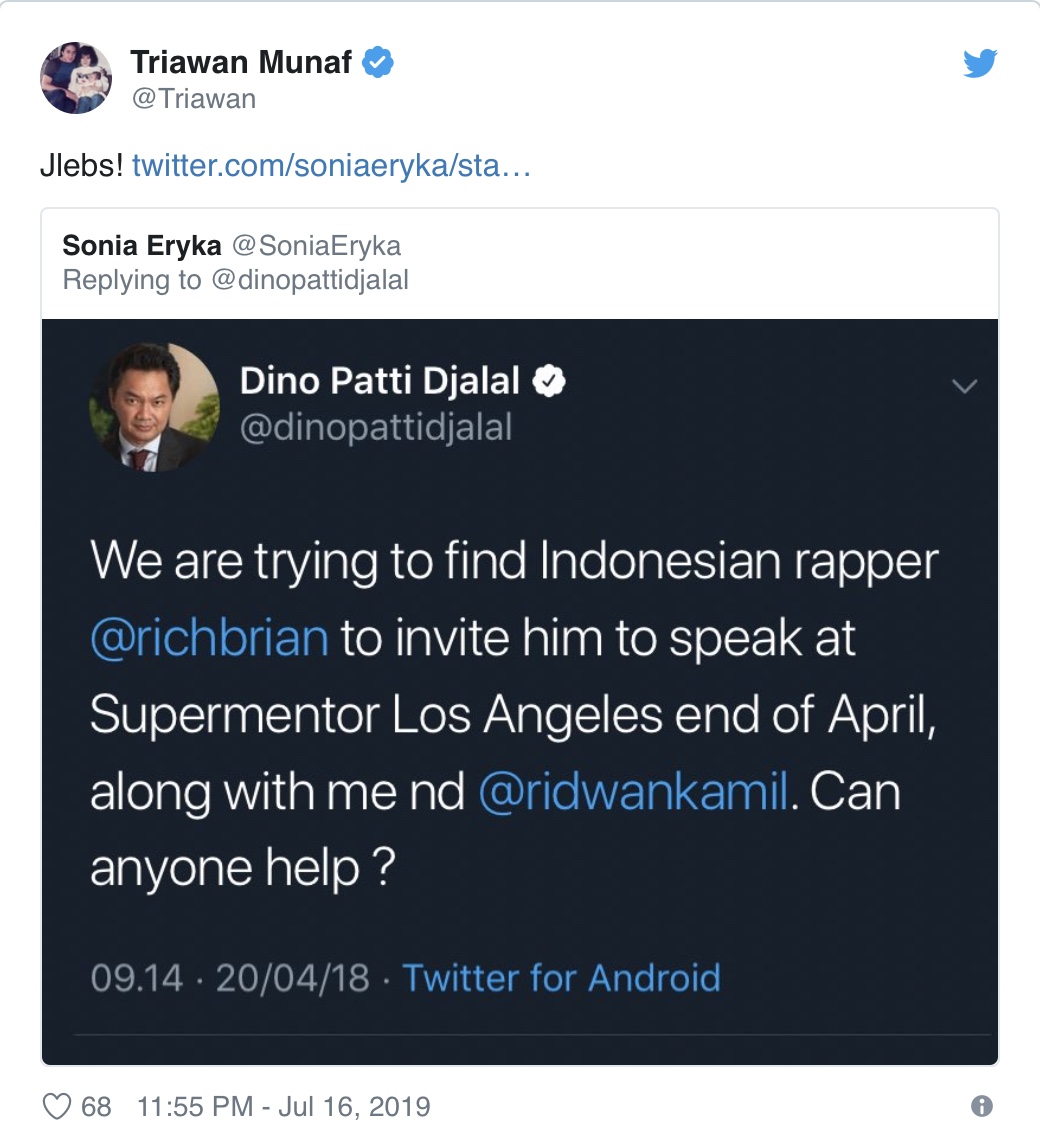 This set off a shitstorm in the Twittersphere as well as the media, to the point that Dino felt he had to clarify his change in attitude toward Rich Brian, not once but twice.
In one Tweet he said that he changed his mind about inviting Rich Brian after reading his tweets that contained obscenities.

In another Dino asked a rhetorical question:would any parent feel that a musician, even though well-known, should be free to use obscenities on social media because they would be emulated by children who idolized them? He then hectored his audience: “My answer as a parent is clear: NO. What’s your answer? Don’t lose perspective.”

Which brings us to the second problem with Dino’s argument about exposing children to obscenities from their idols.

The Supermentor talks attract youths, young men and women to be sure. But not children. It’s a bit ingenuous in this day and age to think that these youths would be anything but nonchalant to Rich Brian’s obscenities on social media. if they are the type who like Rap and Hip Hop they would already be exposed to that kind of language. And guess what? Most of them have not turned into peverts, mysoginists or depraved layabouts.

Dino’s argument also begs the question of what the parents are doing if they allow their children to be on social media. Shouldn’t they be interacting with their children and teaching them about life rather than allow them to roam unsupervised on social media, which has places much more dangerous and obscene than Rich Brian’s feeds?
The curious are now wondering what is the motive behind Dino’s sudden burst against Rich Brian.

Should we take things at face value and suppose that Dino’s a model parent and passionate about parenting, so could just not stand the attention lavished on Rich Brian by the President of Indonesia?

Or should we speculate on what other factors there are that could motivate a once political insider, now locked out of the corridors of power, to resort to such undiplomatic Tweets?