Something incredible, unprecedented and potentially dangerous happened in Malaysia last Friday that most Malaysians do not seem to have paid much notice to.

In fact many of the Malaysian Chinese actually welcomed it, fed up as they were by Malay hooligans trying to stir up Malay supremacist and anti-Chinese sentiments in Malaysia. 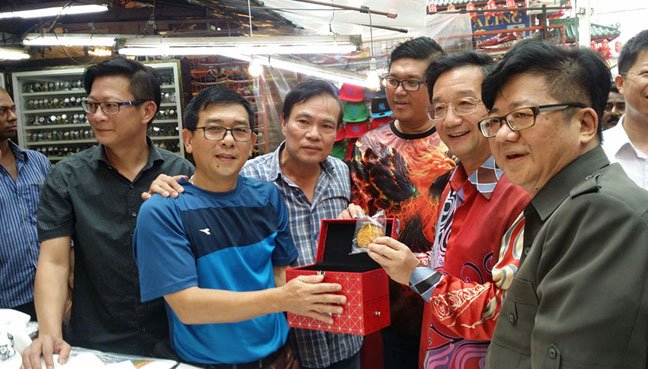 Photo from Free Malaysia Today: “He was there to assure Chinese traders that they will be safe tomorrow and that the police were watching over them in the event there was trouble.”

The incident took place in Petaling Street, an enclave of Chinese traders and shopkeepers right smack in the middle of Kuala Lumpur, that has become the symbol of Chinese presence in Malaysia ever since the Red Shirt Rally on September 16.

Before we go on, a bit of context for those that don’t follow Malaysian political developments closely. The Malaysian Prime Minister is in trouble, not least because of his own stupidity. Already unpopular, he was caught with a smoking gun – US$700 million deposited in his personal account.

His refusal to explain how a large sum come to be in his account, apart from it being from a mysterious Middle East donor, has added to the attacks on him and his government. Adding on the pressure was a huge rally of about 500,000 people that was organised by Bersih, originally an elections watchdog grouping on August 29.

Besieged, Najib or his followers retaliated with a Red Shirt Rally on September 16. The Red Shirts ostensibly were rallying to protect “Malay dignity” and the disrespect the Chinese (the predominant ethnic group in the Bearish rally) have shown to the Malays and their leader, Najib. During their rally a group of the Red Shirts attempted to enter Petaling Street but they were stopped by Malaysia’s Federal Reserve Unit, a specialist division of the police that deals with crowd control.

They were left licking their wounds but threatened to stage a comeback on September 26 where the Red Shirts would enter Petaling Street to stage a protest and demand better conditions for Malay traders so they can also do business there. That was the ostensible reason but in the meantime the organiser Jamal Yunos threatened violence and was, rightly arrested by the police on September 25, a day before the planned rally.

In the meantime, though, the Chinese Ambassador to Malaysia Huang Hui Kang made a bizarre visit to the traders at Petaling Street on the evening of September 26 where he calmed the nerves of the traders by saying, as reported by Free Malaysia Today:

PETALING JAYA: China’s Ambassador to Malaysia has stated his firm belief that all Malaysians, save a handful, already enjoyed racial harmony and appealed to those bent on causing trouble tomorrow, to kindly refrain from doing so.

At a press conference, after distributing mooncakes to those present, Huang Hui Kang said, “I believe that 99 per cent of the Chinese and Malays live harmoniously and only a small number of them want to cause trouble tomorrow.

“We told businesspeople here that they can open as usual tomorrow if they want but if they feel unsafe, the choice is theirs to close instead.”

He also said that the traders at Petaling Street only wanted to carry out their business in peace and that for those who chose to open tomorrow, the police would be on standby to offer security in the event there was trouble.

“So far, about 50 per cent of traders, which equals to around 600 in number, are still fearful of opening tomorrow. However we will keep abreast of the news and act accordingly,” he said.

If you look at the social media feeds, his actions have been lauded and praised. The Chinese welcomed his comments and visit as a show of solidarity and brotherhood. Some even gave the impression that they would welcome China being their benefactor.

Others, including Chinese and Malay leaders in the Government and Opposition have been strangely silent. Only Malaysia’s Foreign Ministry, Wisma Putra, seems to be concerned by this development and has leaked the news that they will be summoning the Chinese Ambassador  for a discussion.

Where foreign relations go this is an incredible development on some levels.

On one level you have China blatantly meddling in the internal affairs of another sovereign country. The ambassador was making statements more appropriate for a Malaysian Minister than an envoy. Who begs the question of whether his message and gesture was sanctioned by China’s government. If it had been we should all shudder as you ask what China has to gain by stoking the racial fire. If it had not, was the Ambassador totally out of line and why has he not been recalled yet? The Chinese Embassy’s explanation sounds as credible as Mao doing a hip hop song.

On another level, the Malaysian Chinese are making a grave mistake by accepting the Ambassador’s words and deeds as a sign of solidarity and empathy. The ancestors of the malaysian Chinese have been migrating out of China for at least the last couple of centuries – and for good reason, China is not a place that they would want to live in because of the socio, political and economic hardships. IN the intervening years, whole generation of Malaysian Chinese have grown up in a different political and social environment. The last thing they would want is China dictating their politics and social norms. China’s interest is not necessarily the same as those of the Malaysian Chinese and they should never forget that. Yet no prominent Chinese leader has come forward to denounce the Ambassador’s blatant assault to Malaysia’s sovereignty. And why? Because what’s popular now among the Chinese is anything slamming Najib and Umno. They won’t do the right but popular thing.

On the third level is the response of the government. Has it become so weak that Wisma Putra has to leak stories to the media that it was summoning the Ambassador to chastise him? His offence has very clearly broken diplomatic protocols. Will this weakness lead to even bolder moves by China? The only criticism so far has come from the Government mouthpiece Utusan Malaysia and Umno Youth but no officials?

As a Malaysian who has lived overseas for most of his adult life, the last two decades spent in Indonesia, Unspun cannot help but marvel at the racial divide in Malaysia, even during a unifying event such as Bersih 4, that took place over this weekend.

For those not familar with Malaysian politics Bersih 4 is the wildly successful and popular rally of Malaysians over the weekend to protest the rotten system of political patronage and corruption among the elite in Umno entering on its leader and Prime Minister Najib Razak (for a primer on this issue see here).

So  hundreds of thousands of Malaysians turned up for the rally in Kuala Lumpur over the weekend. Smaller groups of Malaysians all over the world also gathered in their cities to show support and solidarity with their compatriots. This included Jakarta that held their gathering at a restaurant at Epicentrum (see photo below).

What’s interesting is how one major threat of the conversation about Bersih 4 is going. And it’s all about race. There are those that say that most of the protesters in Kuala Lumpur are of Chinese descent, and that those of Malay descent were under represented. (But I do a disservice to the Malaysian nomenclature – careful phrasings of Chinese descent, ethnic Chinese and ethnic Malays are all abbreviated into Chinese and Malays).

Such observations have given rise to inferences and polemic. Some say that this reflect the political conservatism of the Malays, others say that the Chinese have now become politically dominant at the expense of the Malays; still others disagree and say that the Malays were actively participating, that the overwhelming population in Kuala Lumpur is Chiese, and that many Malays earned less and therefore they had to work serving everything from KFC to McDonalds to Starbucks to the bearish 4 protesters.

Without getting into the merits of their inferences, Unspun  it is telling about Malaysian society how race remains the single most important factor of their lives. It is difficult to imagine such conversations gaining so much play in Indonesia, where protests can happen often and often with the numbers that can make even the Bersih 4 rally a middling event.

That Malaysians are so aware of their race is a testament of how damaging and polarising the Government’s policies have had on the populace. Everything revolves around race and interpreted through the racial prism. Even the most well meaning Malaysians who proclaim that they did not see Malays, Chinese or Indians among he protesters but only Malaysians belie the fact that they are conditioned by this polarisation to have such mindfulness of race.

So where does this leave Malaysia, assuming the Bersih 4 protest achieves its objective and they get rid of Najib?  A bit of a better place but still sitting on a powder keg. Race is polarising, emotive and easily stoked as an issue. It is so entrenched that it will take much effort and many years to undo the harm that the Umno-led government (beginning with Mahathir Mohamad) has done.

But it needs to be addressed. So perhaps when Najib is shoved aside the focus should move toward a depolarisation of race, rather than anything political on the agenda?