Last year a group of us decided to climb Mt. Kinabalu. We weren’t the fittest 40-50 somethings but we weren’t slouches either.We had in tow a 12-year old.

a member of the group, Unspun, for instance,  is in his mid-50s but hits the gym at an average of three times a week chalking up 40 minutes each session on the treadmill at a clip of about 9km/hr.

In spite of this we found the going up Mt. Kinabalu pretty tough. It was one of the mist difficult climbs Unspun has undertaken as the climb up the mountain was an relentless series of fairly high uneven stone steps. And it gets worse the higher you go because the air thins.

Our group managed to trudge the 6.5km or so the first day up to the base station at Laban Rata. It was perched 3,270 meters above sea level. We were exhausted and thought we could sleep well after dinner. But we all spent a restless night tossing about in our bunk beds as the altitude got to us. 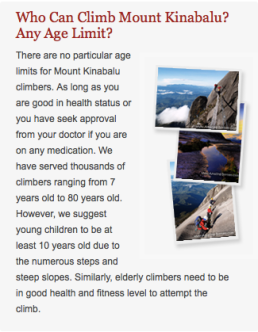 At 3am the next morning we all woke up, had our breakfast and began our ascend to the summit, hopefully, in time to catch the summit. It was cold, dark and very difficult because the thin air made the climb tougher. Our 12-year old had a headache, probably a sympton of altitude sickness so we left him to recover at the laban Rata base station.

The remaining four of us trudged on. The trail was manageable until we hit the section where the trail became a wall of granite rocks that we could only scale with the aid of ropes. It was challenging for someone like me who has no fear of heights but it was terrible for some of us in the group who had to scale those walls in the dark and with the cold wind blowing.

We started thinking that it was a good idea that we had left the 12-year old behind as the steep climbs was actually too dangerous for children. We also started getting a bit angry over two things – why the park authorities had not posted a warning to climbers of the extent of the difficulty in the climb and the potential dangers; and why it allowed children below at least 16 or 18 years to scale the mountain when it was already difficult and dangerous to reasonably fit adults? We also spoke among ourselves what park authorities in Western countries – who generally have a higher level of care to such details – would have done. We concluded that they would at least have adequate warnings on their website of the challenges that climbers would face.

We managed to clear the section and got up to about 3,400 meters above sea level where there is a reporting station. Our guide (and yes its true what they say about the stamina, courage and level of care of the Kinabalu guides) told us that we would not be able to make sunrise at the pace we were going.

As we were all exhausted, we decided to abort the climb and started trekking down, through the wall of granite and back to Laban Rata. The rest of the climb down was jarring and difficult but manageable.

I thought of posting something about the danger to children climbing Mount Kinabalu but got busy and forgot about it.

The recent earthquake and the tragedy unfolding at Mount Kinabalu has prompted me to write this in hopes that the Park authorities will at least in the future provide adequate warning to would-be climbers and considering upping the age-limit of the climbers.

Right now the official Mt. Kinabalu website cheerily gives the impression that anyone between 10 and 80 years old who’s reasonably fit can make the climb. That is inaccurate and dangerous information.

But a disturbing question is this: did the teachers are the Singapore primary school not do their research before deciding to take the schoolchildren on the hike up Mt. Kinabalu? Our did they, like us, take the information on the Kinabalu official website on surface value as well?