A feeling of sadness always descends on me when I travel to the old, colonial part of Jakarta, Kota Tua. It was once the busiest part of Jakarta since it was close to the sea and port. Many old buildings stand there still. A few have been restored well, some have been mangled by modern bad taste.

The majority of buildings however, are left to rot, abandoned and neglected and suffer the indignity of being a dumpsite for rubble and rubbish.

In spite, or perhaps because of this neglect, the Kota Tua area has grown to be a hodgepodge of narrow streets, filthy drains and canals, small recently built houses, and homeless workers who sleep outside the buildings at nights or on holidays when the shops are closed.

A way of life has evolved there, with middle-class to poor Chinese Indonesians living cheek by jowl with the Betawi and other immigrants. This life recalls a Jakarta gone by, a simpler and less prosperous time when people made do, things get repaired or recycled rather than discarded.

It is also a time of simpler pleasures, such as a bicycle ride but now done with the menacing roar of traffic beside the cyclists.

It is a life of simple commerce where you’re likely to know the street vendor and shops catering to local tastes.

The Jakarta Government has talked about reviving Kota Tua and have even formed a Jakarta Old Town Revitalisation Corporation, but it seems to be more talk than action.Buildings lies neglected but life goes on as people, in their ingenuity, will find some means to make money to feed themselves and their families. 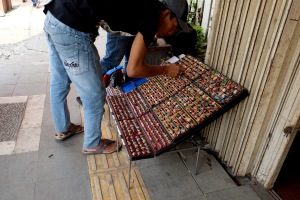 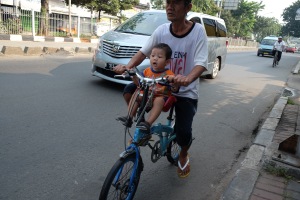 So another year goes buy. The buildings rot even more. Some are knocked down, others catch fire. Slowly, what was once the heart of Jakarta gets buried ever deeper into the mists of time.

Took a friend for some photo hunting in Glodok yesterday before she leaves Indonesia. These are some of the images Unspun bagged with his new toy, a Canon 50D.

Cat preening self on a billiard table

Man sifting through garbage. He probably had zero body fat