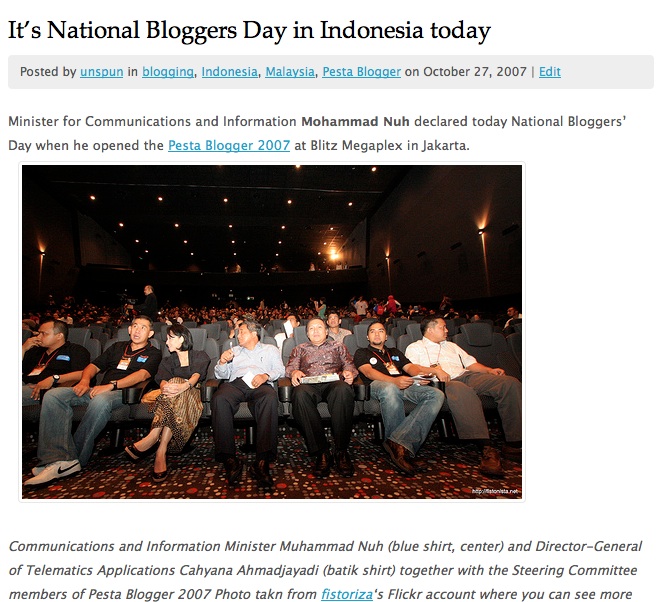 Minister for Communications and Information Mohammad Nuh declared today National Bloggers’ Day when he opened the Pesta Blogger 2007 at Blitz Megaplex in Jakarta.

He said this was to motivate bloggers to keep on improving their content and even offered a special prize if the bloggers could come up with the lyrics and songs which could reflect the theme of Pesta Blogger 2007, “The New Voice of Indonesia.”

The Minister was so supportive that on his way out, after delivering his speech and staying on for a talkshop-format discussion, he donated, on behalf of his ministry, an Asus laptop for the Best of the Best Blog award at the gathering.

Throughout the event Unspun could not help but marvel at the contrast in relationships between Government and bloggers in Indonesia and Malaysia. If only the Malaysia Government could learn how to engage this vocal segment of the population, its job could be so much easier. Then again, can one imagine Malaysian Ministers saying that they have much to learn from Indonesia? NOT.

Update: At Pesta Blogger on October 27, the Bloggers for Bangsari managed to raise Rp7.5 mio from the participants. That adds up to 15 goats, said one of the organizers, very pleased with the results, more so because other blogger’s interests have been piqued and inquiries and pledges are coming in. Way to go Bloggers for Bangsari. You rock!

With two days more to go to Pesta Blogger, Indonesia’s first nationwide gathering of bloggers, the fun has ratcheted up a notch with the Steering Committee deciding to let groups of bloggers do their thing.

They’ve allocated a Mimbar Bebas, or a free forum, where bloggers can get center stage for a few minutes to do whatever they want or espouse whatever causes they want. Something like a Speakers Corner of the Indonesian blogosphere.

A band of bloggers calling themselves Bloggers for Bangsari is trying to raise money to buy a goat. The goat is to be donated to the school children of Bangsari, in Cilacap, Central Jawa.

Also check out the creativity that Pesta Blogger has inspired with this YouTube upload of a film “I’m proud to be an Indonesian blogger” by filmmaker Iman Brotoseno. Iman and his crew will also be at the Pesta to shoot the event and all the cute bloggers there.

With eight days to go to Pesta Blogger 2007 the Steering Committee has been inudated with inquiries from well wishers wanting to know if they might be able to make donations of gifts or cast to help make this event, the first ever large scale national gathering of bloggers, a success.

Any company or individual interested in becoming a well wisher/contributor to Pesta Blogger can check out the Pestablogger.com website for more information. Or the can contact event manager Hanny by email. We are looking for gifts and stuff that we can insert into the goodie bags for participants. Remember, however, that this is a not-for-profit event, it is informal and results of all contributions will be listed, audited and reported at the Pesta Blogger website after the event.

Many businesses and individuals have contributed selflessly and generously to make this event a success that we think it will be and this is as good a time as any to thank them.

Microsoft Indonesia and Nokia Indonesia were first off the mark in becoming sponsors. XL Business Solutions was next to agree to become a sponsor. Kompas Cyber Media, Koran Tempo, and The Jakarta Post were all very accommodating and fabulous as media partners. Others to thank are Rony at Jogja who designed the Pesta Blogger Button , Jerry Aurum for designing the Pesta Blogger logo and Rangga Sastrowardoyo who chipped in to design the newspaper ads for Pesta Blogger which will appear next week.

Among the well wishers and contributors, those who have joined the party are Mobile Magazine, Digital Mark Reader and Mr. Potato. Keep abreast with the news at Pestablogger.com.

( Disclosure: Unspun works at Maverick which is helping to organize the Pesta Blogger)

It is nine more days to Pesta Blogger 2007 at Blitz Megaplex and the Indonesian blogosphere is buzzing with anticipation.Response for the gathering, Indonesia’s first national gathering of bloggers, has been so overwhelming that the Steering Committee is now planning for double the number of participants from its original plan of 200.

According to Steering Committee Chairman Enda Nasution bloggers from cities other than Jakarta are planning to send teams to the gathering. So far the 100 free places have been snapped up and is oversubscribed by more than 3 times – 358 applications, to be exact.Some bloggers, such as Aristanto and Thomas Arie Setiawan are just chuffed that they’ve received their passes to go to Pesta Blogger.

With the extra capacity of Blitz, the Steering Committee is now allocating about 200 places for representatives of blogging communities from the provinces, 50 places for the media, 30 places for sponsors(XL Business Solutions, Microsoft and Nokia), media partners (Jakarta Post, Koran Tempo and Kompas Cyber Media), well wishers and contributors, as well as another 15 spaces for group discussion leaders.

In an attempt to prevent disappointment from turned away bloggers at the door, the Committee is also allocating 100 places for those who show up on the day but who have not been registered. They can come in by paying Rp 100,000 to cover the costs of food and venue.

Word is that foreign media is also interested in attending. They include Global Voices‘ Preetam Rai and Angilee Shah, the former editor of Asia Media /UCLA have said they would attend.

The Pesta Blogger now looks to be shaping up to be a much bigger event that most of us thought it would be, thanks to the sponsors and partners, as well as all those who chipped in to help.

Update: 12.55pm. Oct 5: It is nearly three hours since the registration opened and already there have been 72 bloggers who have registered to come to Pesta Blogger. So hurry, only 28 places left before registration closes. Unspun’s been told also that the Pesta Blogger is attracting a lot of attention from all quarters and as a sign that it’s being taken seriously some bloggers have taken to satirizing the event (and some are very funny indeed) and there’s even a group to boycott it. Well, that group had better hurry or it’d be like bolting the barn door after the horse has bolted

The registration for the 100 free places at Pesta Blogger starts tomorrow at 10am. Make sure you’re there as we expect these places to fill up fast. Ke Pesta Blogger Yuk! The link: Pestablogger.com

He contributed this design free of charge to Pesta Blogger, another instance of how some many people seems to come together to make this event a success. Thanks Jerry!
Follow the link below to get to the Pesta Blogger blog and to download your badges.

Indonesia’s first large scale bloggers gathering is under way.The steering committee today held a press briefing to announce details of the gathering, Pesta Blogger, on October 27. They aim to attract 200 bloggers from throughout Indonesia and so far, judging from some of the comments in the site bloggers from Solo, Bandung, Yogjakarta and Kalimantan. Some commentators have also asked for the event to have a video streaming/chat facility.

Present at the press briefing today were big names in the Indonesian blogging community, such as Enda Nasution (who is also chairman of the steering committee), Budi Putra, Wimar Witoelar, Nukman Luthfie, Shinta Dhanuwardoyo, Lita Mariana, Priyadi, Ratna Arianti. (see photo below from the Flickr account of

For more details go to Pestablogger.com. You can also find more information in the following links here, here, here and here for instance.

The Steering Committee will invite 100 bloggers to ensure that there is a spread of different interest groups. It will then open the next 100 places to bloggers on a first-come-first-served basis.

(Disclosure: Maverick, the company Unspun works in, is helping to organize the Pesta Blogger)